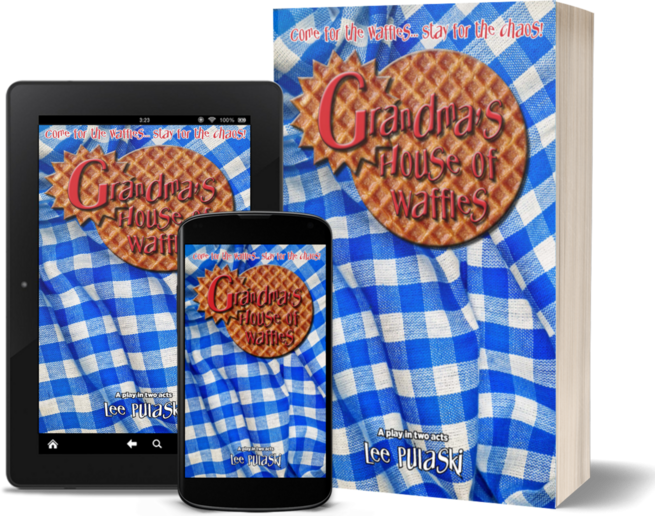 Grandma's House of Waffles   (A play in two acts)

In the mythical community of Folkland, storybook characters carry on everyday lives. In the middle of Folkland is Grandma’s House of Waffles, the home of the famed golden waffle. Hansel performs occasional manual labor, eager to start a new life after being paroled for the gingerbread house incident. Katie Woodencloak, a bitter former princess who never envisioned she’d be a short order cook, mixes the waffles and pours delicious ambrosia. Rounding out the group is Little Red Riding Hood, who serves the golden waffles and faithfully keeps the waffle house running for her absent granny.

One day, Grandma returns after losing all her money in Las Vegas, but what she hasn’t mentioned is that she also lost the deed to the waffle house to a seemingly innocent sheep. However, that sheep turns out to be none other than Mr. Wolf, Folkland’s shifty building inspector, who plans to leave public service and take over the waffle house in the hopes of learning the secret recipe for the golden waffles. Red and the other employees must figure out how to get the waffle house back into Grandma’s hands before it’s run into the ground!

GRANDMA'S HOUSE OF WAFFLES IS AVAILABLE FOR THEATRICAL PRODUCTIONS. TO GET THE RIGHTS TO PERFORM THE PLAY, CONTACT LEE PULASKI HERE.